The experience of pioneers

One isn’t yet in the public domain so I’ll come back to it when it does appear. But this piece of research by Beth Keith on behalf of Fresh Expressions is excellent. It was conducted through a series of small group gatherings of pioneers round the country. The information has then been collated into a series of themes raising a number of points and offering some recommendations. You can download the report from here on the Fresh Expressions web site.

Jonny then goes on to give a brief overview of the research - some interesting insights on sustainability, finance, over-optimism, lay workers and more.
Posted by Mike Crowl at Wednesday, April 27, 2011 No comments: 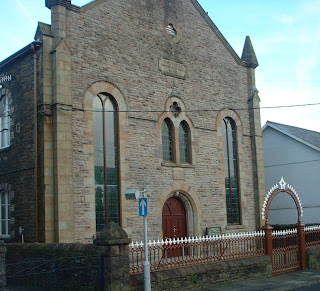 Wales online reports that Welsh chapels struggling for members are swapping prayer books for Facebook, hoping that younger people will be attracted by the social network site. Twitter is also being used. (I think this reported line might be a tad metaphorical; have the prayer books actually been ditched as yet?)

Some Welsh congregations have launched their own online TV station in a bid to salvage dwindling attendances. Annibynwyr TV is possibly the first internet channel of its kind launched by any denomination in the UK.

In the last three decades the average Welsh chapel congregation has gone from just under a 100 to around 50, and only around 60% of the chapels that existed 30 years ago are still functioning.

The Rev Andrew Lenny, president of the Union of Welsh Independent churches, says:

“We as a denomination are working towards utilising new media in order to engage with communities who we might not otherwise reach. While our key messages remain the same, we recognise that we have to embrace these new and vast means of reaching out to people.”

Two of the quotes Simon Carey Holt uses in his Easter Sunday sermon, Yes! reproduced in his blog.

Jurgen Moltmann says that ‘True spirituality is the rebirth of the full and undivided love of life; the total Yes to life and the unhindered love of everything living.’

I sat through a sermon on Sunday that seemed to me to be more about the Cross, Good Friday and dying to life/self. Could have done with a bit more celebration....!
Posted by Mike Crowl at Monday, April 25, 2011 No comments:

The mission?
Design a simple dwelling that can be constructed for under $300 which keeps a family safe, allows them to sleep at night, and gives them both a home and a sense of dignity.

The $300 house has been in the pipeline for some time now, and it's getting to a point where some real progress will be made.

Like Habitat for Humanity this is an attempt to make housing affordable for people who would otherwise never live in their own home. Unlike H for H it's aimed at people in poorer countries for whom the H for H house would be a complete dream.

In an article by Christian Sarkar, you can catch up on the progress of this innovative idea. The $300 house is mission in action, yet comes out of the business world....

The following paragraphs were written by one of the participants at the Epic Fail Conference. J R Briggs was given permission to include them in his blog, so I'm hoping that the writer of these words is happy to have them disseminated further on the Net.

Anyone who has ever read through the book of Acts has felt a tension between the words on the biblical pages and the state of the current church. There is a glaring hole between them and us. Miracles, revival, and community were the normative. There is a culture of “God-movement” that defines the early followers of Jesus. As a Jesus follower, the thing that strikes me most is the deep connection that existed among this community. A community that is often described as the Acts 2 church.

I want Acts 2 community, in a bad kind of way. I have read many books, listened to many lectures, taught often, and even written about the pursuit of community – yet it remains slippery and seemingly just out of reach. This past weekend I heard a brother make a profound statement that has reminded me of of a great truth. Ready?. Acts 2 is preceded by Acts 1. Selah.

Simple, yet profound. Acts 1 is about the people of God, longing for the presence of God, waiting on the promise of God. They prayed, and God came in power. Power that manifested itself in witness to the Resurrection of Jesus and the birth of a community. Acts 1 is about impregnation – being filled with life. This naturally leads to Acts 2 lifestyles. Why? Life begets life. The Spirit produces a community that is united, not the other way around. The point – If you want to be an Acts 2 church, you must become an Acts 1 church first.

The opening video to the Conference is here:

How we started the conference from Epic Fail Pastors Conference on Vimeo.

Back in February I mentioned the Epic Fail Conference that was due to take place this monthy. It's now been and gone, and there's a lengthy blog post reporting back on how it went from one of those, J R Briggs, who was involved in the organisation of it.

In a sense, the Epic Fail Conference was a success, which is slightly ironic. Briggs notes: I was absolutely scared to death to try this (Can you imagine the headline: “Epic Fail Pastors Conference cancelled due to low registration”? I wondered if I could ever recover from such irony). A first-time, low-budget conference on failure in a suburb of Philadelphia that is anything but a tourist destination seemed like a large enough risk – but the response took me by surprise. We thought it would be a small, regional event. But people flew in from 15 different states – some not knowing many of the details, but knowing deep down they had to attend. There was a least one participant from Australia.

Rather than continuing to quote Briggs, I recommend that you read the post in full. It's insightful, and looks at issues that this blog has often commented on.

So who's going to be first to provide an Epic Fail Conference in NZ?
Posted by Mike Crowl at Tuesday, April 19, 2011 1 comment:

Yes, you're right, there hasn't been a great deal appearing on this blog over the last week or so. However, I have all sorts of reasons/excuses for that, none of which I'm going to present...

Anyway, here are a couple of things worth noting that you may not have caught up with elsewhere.

Scottish Seeds in Antipodean Soil: the development of Presbyterian Worship in Aoteaora New Zealand, by Graham Redding (the most recent past-Moderator of the Presbyterian Church in Aotearoa NZ). I read an earlier version of this recently...

Graham's paper sets our early colonial worship patterns in the context of the Reformation and Church of Scotland history and then explores worship trends in NZ Presbyterianism to the modern era. This work in progress is the first attempt by any within the Presbyterian Church to explore and map the contours of this fascinating topic at such depth.
Why, he asks, have Presbyterians in this country never had a service book like the Anglicans? Is there anything distinctive about worship in a Presbyterian church? Does it have any underlying convictions? In what ways has it evolved over the years? What are its major antecedents? What have been its main liturgical and theological influences? Which personalities have played a key role in its development?

The current Presbyterian Moderator, Peter Cheyne, notes that there is a wortwhile series on discipleship from George Barna available here in New Zealand. It's called Growing True Disciples of Jesus, and the details of price and where to get it are available on Peter's blog.
Posted by Mike Crowl at Thursday, April 14, 2011 No comments:

In case you thought that retirement had settled upon me in such a way as to make me a bit like Rip Van Winkle, asleep while the world passes by, let me assure that I've actually been busy enough this week to keep me going most of the time. Okay, occasional rests have been the order of the day, and walks with the dog, but in general I'm still keeping an eye on what's going on.

Hence, links to a couple of blog posts. The ubiquitous David Fitch wrote one, and is featured in the other. Don't let that put you off; to me he speaks some pretty good sense, if we're prepared to listen.

The first is Fitch's own, a post on the kind of leadership needed for the postmodern world. It looks pretty much like the servant leadership Jesus espoused - so that's a good thing (!)

The second comes from another old favourite on this blog, Len Hjalmarson. In this one he quotes Fitch a good deal as he draws up a list of ways to 'instill missional habits.'

This post is as countercultural (at least counter church-cultural) as the first. Both worth chewing over while you're having your morning cuppa.